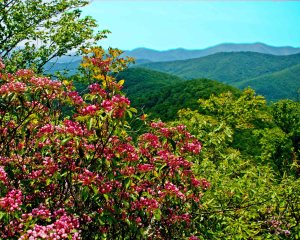 Jim and I spent Sunday afternoon hiking on Roan Mountain, part of the Pisgah and Cherokee National Forests, located along the border between North Carolina and Tennessee. The altitude (6000 feet) offers conditions that allow huge clusters of wild Rododendron to grow in open spaces and along sunny edges of the forest. Hiking trails lead through a luxuriant spruce-fir forest. Yesterday a light fog made the forest seem especially dark and mysterious.

It saddens me to think that a century ago little more than tree stumps occupied this beautiful space. During the 1920s and 1930s logging companies cut all of the marketable timber, leaving the land as we see in the photo above. In 1911 the Weeks Act had authorized the Federal Government to purchase forest land in the Eastern United States. In 1941 the government bought much of the land on Roan Mountain and added it to the Pisgah and Cherokee National Forests. Today about 4 percent of North Carolina’s land is National Forest.

These two incidents—deforestation and the establishment of National Forests—represent a current controversy. Is there any reason to believe that capitalism without regulations would not again decimate our natural resources? Already 500 mountain tops have been removed so that mining companies can more cheaply get the coal. Now fracking threatens to poison our ground water and cause earthquakes.

And what should the government spend money on? Had the government not purchased deforested mountain land in the early twentieth century, we wouldn’t have our National Forests.

4 thoughts on “The role of government in environmental issues”